As an undergraduate research assistant, I spent three years as the primary developer for an NLP-driven web application built to assist a humanities professor (Dr. Peter McIsaac, University of Michigan) with his research on 19th-century German literature. The application allowed him to run statistical topic models (LDA, HDP, DTM, etc.) on a large corpus of text and displayed helpful visualizations of the results. The application was built using Python / Flask / Bootstrap and also supported toponym detection and full-text search. We used gensim for topic modeling.

Using the web application I built, my supervisor was able to effectively detect cultural and historical trends in a large corpus of previously unstudied documentsThis is a cheeky remark!. Our efforts led to a number of publications in humanities journals and conferences, including [McIsaac 2014]:

Our analysis focused on a corpus of widely-circulated periodicals, published in Germany during the 19th-century around the time of the administrative unification of Germany in 1871. Through HathiTrust and partnerships with university libraries, we obtained digital scans of the following periodicals:

These periodicals, published weekly or monthly, were among Germany's most widely-read print material in the latter half of the nineteenth century, and served as precursors This is a longer remark that provides more detail about something in the main article.to the modern magazine. Scholars have long recognized the cultural significance of these publications (c.f. [Belgum 2002]), but their enormous volume had so far precluded comprehensive study.

Using statistical methods, including topic models, we aimed to study the development of a German national identity following the 1848 revolutions, through the 1871 unification, and leading up to the world wars of the twentieth century. This approach is commonly referred to as digital humanities or distant reading (in contrast to close reading).

Initially, we only had access to digital scans of books printed in a difficult-to-read blackletter font. In order to convert our scanned images to text, I used Google Tesseract to train a custom optical character recognition (OCR) model specialized to fonts from our corpus. Tesseract performed quite well, but our scans exhibited a number of characteristics that introduced errors into the OCR process:

The examples below highlight some of the challenges we faced during the OCR phase.

As a result, significant pre- and post-processing of OCR results was necessary. We combined a number of approaches in order to reduce the error rate to an acceptable level:

With these improvements, we found that our digitized texts were good enough for the type of exploratory analysis we had in mind. By evaluating our OCR pipeline on a synthetic dataset of "fake" scans with known text and a configurable amount of noise (speckles, erosion, dilation, etc.), we found that our OCR correction efforts improved accuracy from around 80% to 95% or higher.

In natural language processing, topic modeling is a form of statistical analysis used to help index and explore large collections of text documents. The output of a topic model typically includes:

The most popular topic model is Latent Dirichlet Allocation (LDA), which is succinctly described by the following probabilistic graphical model. There are T topics, M documents, N words per document, and V words in the vocabulary.

Each topic t is represented by a probability distribution βt​ over the vocabulary, indicating how likely each word is to appear under topic t. LDA posits that documents are written using the following generative process:

Of course, this is not how humans actually write. LDA represents documents as bags-of-words, ignoring word order and sentence structure. When topic models are used to index or explore large corpora, as was our goal, this is an acceptable compromise. Given a collection of documents, LDA attempts to "invert" the generative process by computing a maximum likelihood estimate of the topics βt​ and topic mixtures θm​. These estimates are typically computed using variational expectation-maximziation.

I no longer have access to the most up-to-date version of dhgp-browser, but here are some screenshots from mid-2015:

The poster below summarizes the progress made during my first year on the project, which I initially joined through the UROP Program at UM. After my first year, I was hired to continue working on the project as an undergraduate research assistant. 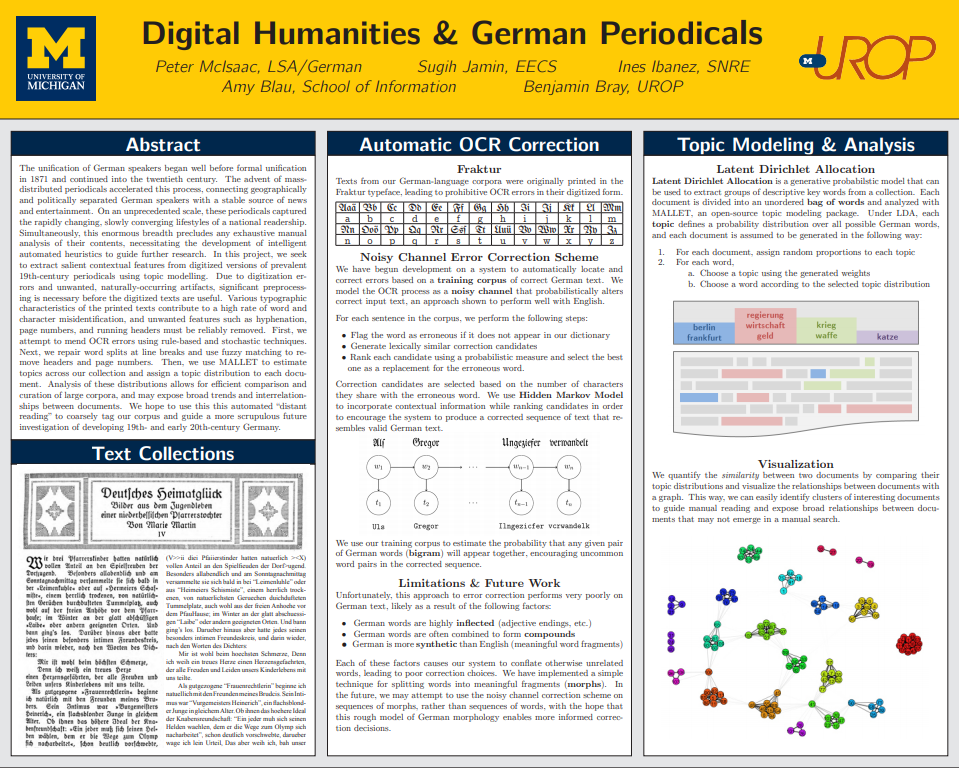